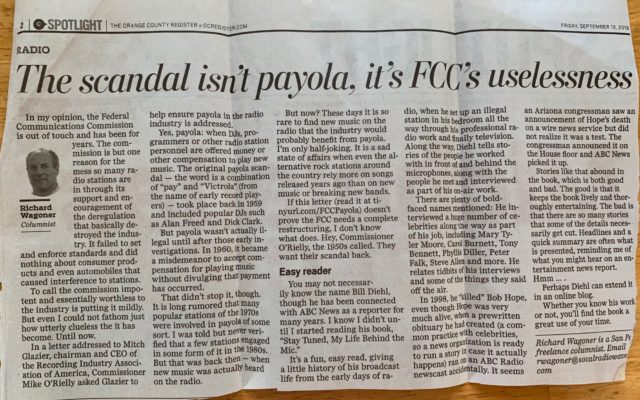 My Dad, John G. Young, turned 80 years old on February 29th…yes, he was a Leap Year baby back in 1940, so we’ve always celebrated his birthday on February 28th. Well, “celebrated” is a strong word…my Father hates birthdays and he literally would and does do anything to avoid them (he’s currently on a Caribbean cruise with my step-mother, blissfully avoiding the rest of the family). His 80th is a big deal, however: he’s lived longer than any of his relatives in the small family that is my father’s side, seeing as heart disease runs rampant in The Young Family and no Young has lived beyond his or her late ‘70’s until now. Another curious thing has happened as my father has eased into his 8th decade: he’s begun to reach out to me via a weekly envelope full of radio-related newspaper clippings. They started out as a simple letter with a press clipping about the 1950’s radio “payola” scandal that my Dad thought I might find interesting; when I thanked him for the information, he replied “well, I could send you weekly updates on radio news from the local paper if you want.” Recognizing that this might be a way not only for my retired father to keep his brain busy, but it could be a good way for us to stay connected (my Dad still lives in SoCal where I grew up). These weekly clippings are headed for their one year anniversary in May, and he’s expanded the contents of the envelopes to include family photos, stickers, and jokes he thinks I might be able to use on The KUIC Morning Show. Of course I could get these radio stories online, but that’s not the point…staying connected to a historically distant parent is 🙂