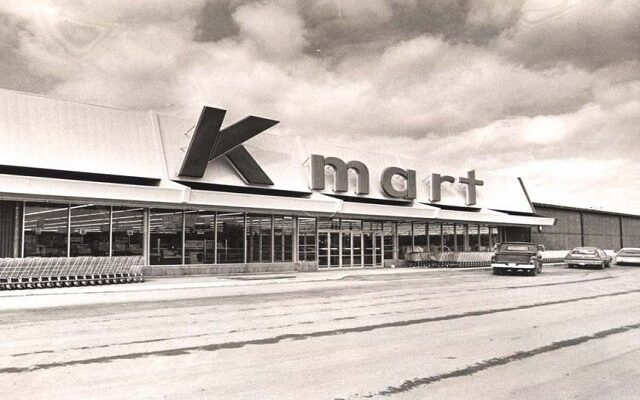 Kmart was once one of the largest retail chains in the country, and there were TWO K-Marts near my hometown of San Juan Capistrano in SoCal where I grew up. K-Mart was a magical place when i was a kid: they sold 45 rpm records (displayed from #1 through #40 as you walked into the store), they had an amazing toy section, and my parents were happy to take us there because THEY would be searching out the famous “Blue Light Special” (which was anything from Men’s underwear to portable Barbeques). Today, however, the number of K-Mart stores has dwindled down to four in the U.S., and one of those was closed last week. That K-mart was in Avenel, New Jersey, and it shut down for good on April 16th.  That will leave just three stores remaining in operation, all on The East Coast: Westwood, NJ, Long Island, NY, and Miami, FL. A little  history: K-mart was founded back in 1899 as The S.S. Kresge Company (thank you Google). The name officially became “Kmart” in 1962,  and at its peak the corporation operated over 2,000 locations across the country.  It filed for Chapter 11 bankruptcy in 2002 and a second time in 2018. Various attempts to revive the brand and legacy have apparently failed, but I will always remember the cool deals and friendly folks at my local K-Mart when I was growing up. Hasta La Vista K-Mart 🙂