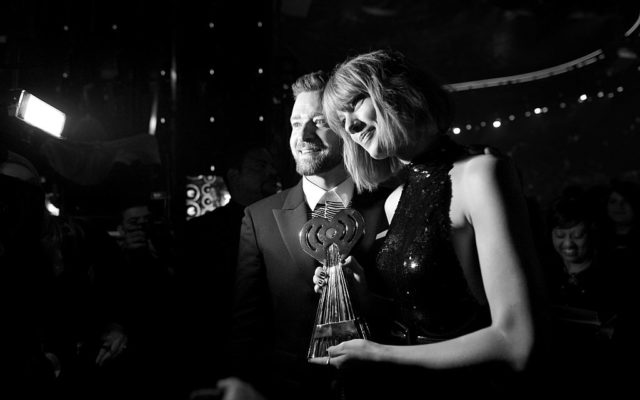 INGLEWOOD, CALIFORNIA - APRIL 03: (EDITORS NOTE: Image was shot in black and white. A color version is not available.) Singer Taylor Swift (R), winner of the Best Tour award, and singer Justin Timberlake pose backstage at the iHeartRadio Music Awards at The Forum on April 3, 2016 in Inglewood, California. (Photo by Charley Gallay/Getty Images for iHeartRadio / Turner)

Justin Timberlake joined Taylor Swift and other celebrities from Southern states who are calling for the removal of their state’s confederate statues. Timberlake posted a video from The ACLU that details the history of monuments that celebrate KKK leaders and those who benefited from racism. Timberlake tweeted the following @jtimberlake: “When we protest racism in America, people think we are protesting America itself. Why is that the reaction? Because America was built by men who believed in and benefited from racism. Plain and simple. If we plan to move forward, these confederate monuments must come down.” A statue of Nathan Bedford Forrest, the first Grand Wizard of the KKK, sits in the Tennessee State House…nothing short of disgusting. Taylor Swift also called for the removal of this statue, saying, “When you fight to honor racists, you show Black Tennesseans and all of their allies where you stand.” Reese Witherspoon and Faith Hill, both Nashville residents, also showed their support of the removal of confederate statues in Tennessee and Mississippi. Is there REALLY anyone besides avowed racists and misguided “cancel culture” opponents who want to leave these despicable monuments to hate standing? Take them down, put them in a “Museum of our Shameful Past,” and let’s erect statues and monuments that celebrate the promise of America: Liberty and Justice FOR ALL.