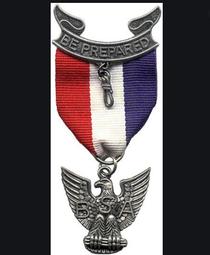 Last week marked a milestone for the 111 year old Boy Scouts of America: the organization graduated its first ever class of Female Eagle Scouts. Over 1,000 young women were awarded the organization’s highest rank of Eagle Scout last week; this happened two years after the Boy Scouts began allowing girls to join the organization. My father was an Eagle Scout, something he was proud of all his life, and he would often remind me that becoming an Eagle Scout wasn’t easy. In fact,  only 6% of Scouts ever make it to “Eagle Status”, according to the organization.  Requirements for The Eagle Scout designation include earning 21 merit badges (!) and putting together a  large service project to help one’s community. One of the recent honorees, Lauren Nedrow, told CBS News: “Everyone that’s in Scouts has a little bit of ‘I want to change the world’ in them”. Amen, Lauren!