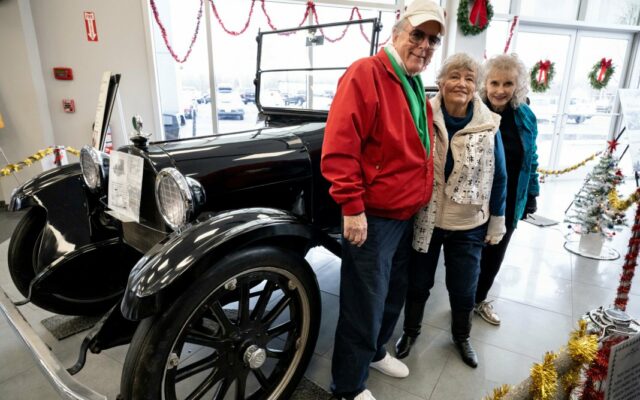 Frank Capra’s multiple-Oscar-winning 1946 Holiday Classic It’s A Wonderful Life, starring Jimmy Stewart, Donna Reed and Lionel Barrymore, features Stewart’s character, George Bailey, driving — and crashing — a 1919 Dodge Brothers touring car in the imaginary town of Bedford Falls…it’s one of the pivotal scenes in the movie, making this classic vehicle a minor “star” in the film. Well, that car had a starring role again in the 75th Anniversary edition of the “It’s A Wonderful Life Festival” in Seneca Falls, New York, as reported by FingerLakes1.com. The car, which was completely restored in 2010, was displayed at James Chrysler Dodge Jeep & Ram throughout the annual festival. In an ultra cool move, the car was reunited with Karolyn Grimes, Jimmy Hawkins, and Carol Coombs, the actors who portrayed the Bailey children (Zuzu, Tommy and Janie, respectively) in the movie! Happy New Year to them…and you all! Here’s to a better 2022 🙂