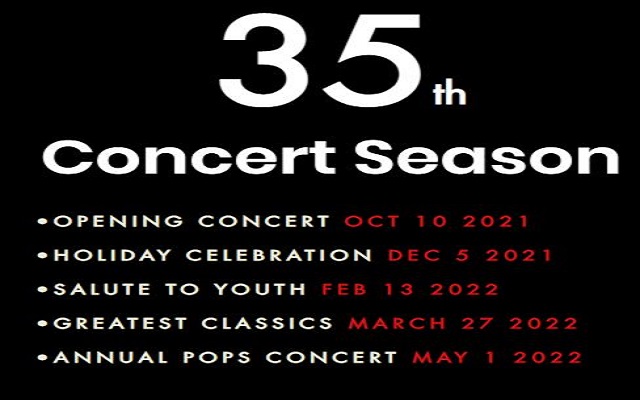 With great anticipation, the Solano Symphony
Orchestra, under the direction of Maestro Semyon Lohss, looks forward to presenting its
35th season, performing five concerts of the finest symphonic music for full orchestra.
The wide-ranging selection of superb music, which guarantees something for everyone,
includes the stirring music of Beethoven, the lilting Viennese charm of Schubert and
Johann Strauss Jr., the magical music of the holidays, as well as the boisterous verve of
American movie music.

In March, featuring the World’s Greatest Classics, the orchestra brings to life one of the
choicest works of the symphonic repertoire, the Symphony No. 2 in C minor by
Tchaikovsky, known as the “Little Russian,” which brims with Russian folk melodies and
musical color. And finally, for those who revel in blasts of popular music bursting from
the stage, May’s Annual Pops Concert presents energetic tunes from Vienna, Spain,
England, and Hollywood: everything from a rhythmic Strauss quadrille to music that
captures the excitement of a James Bond adventure and the zaniness of Looney Tunes
cartoons.

From the Season Opening Concert’s strains of “The Star-Spangled Banner,” to the last
show’s stirring rendition of “The Stars and Stripes Forever,” the Solano Symphony

Orchestra invites you back to hear great music alive in all keys and styles, led by our
inspired conductor and performed by our superb musicians. Check out the details of the
complete season’s performances at the orchestra’s website and enjoy the experience of
the full orchestra’s sound, presented at your doorstep.