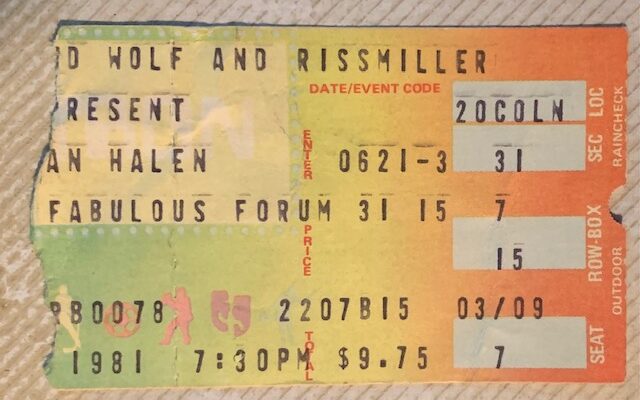 This is the time during early Summer when rock concert remembering becomes a thing…seriously, look on social media or in trade publications and you’ll find celebrities reminiscing about their first concert experiences. These are often hard for me to read – not because I can’t read well – but because celebrities are so much younger than I am and their “first concerts” are groups like N’SYNC, The Foo Fighters or Snoop Dog. Don’t get me wrong, those are all great concert experiences I’m sure; heck, I took my then-seven year old daughter Nicole to see Britney Spears back in 2000. My first real Rock Concert? The mighty Van Halen, at the beginning of their meteoric rise to the top of the rock world in 1981, at The Los Angeles Forum on their “Fair Warning” tour (note the pictured ticket stub). Yes, kids, that was back when we had paper tickets that you had to buy at a ticket counter (or in my case, a scalper), but it was worth every penny of that $14.00. The band opened with “Running with The Devil” and closed the show with their smokin’ cover of The Kinks “You Really Got Me.” No opening band, either, just the hilariously braggy David Lee Roth introducing the band under a loan green spotlight center stage. Enough about my ancient first-concert memories…what’s YOUR first concert?