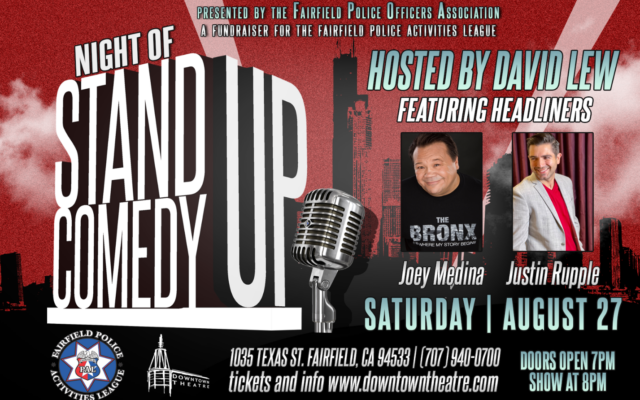 The Fairfield Police Officers’ Association (POA) invites adults to have some summer fun and help support teens in Fairfield, Suisun, and Travis Air Force Base on Saturday, August 27 at 8pm at the Downtown Theatre in Fairfield. Tickets are $54 per person and can be purchased at www.downtowntheatre.com. The event will be hosted by David Lew, comedian and producer and will feature headliners:

Joey Medina (known from the Original Latin Kings of Comedy) and Justin Rupple who has appeared in How to Train Your Dragon: The Hidden World), Spider-Man: Homecoming, and The Fate of the Furious.

Funds raised from the show will be used to help make necessary upgrades to the new PAL location. The Fairfield PAL Teen Center opened at 250 Travis Blvd in 2009 and has served over 4000 local teens and their families.   Fairfield PAL uses the fun of traditional recreation to engage teens and help build great skills.  For more information about Fairfield PAL or the event please call 707 249 1379.